At the park near our place in Istanbul, the air was filled with the sweet smell of wisteria vines loaded with lavender blooms in April. 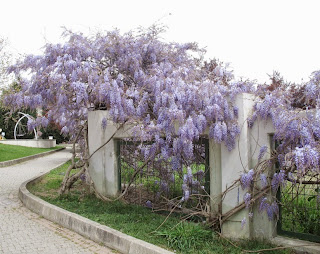 How to tell which kind of wisteria they were? Of the most common three kinds, the ones native to the United States do not smell. These had to be the Chinese (Wisteria sinensis) or the Japanese wisteria (Wisteria floribunda). I tried to find out if the twining (twisting to wrap around a sport) of the stems was clockwise or counter-clock wise. The twining was counter-clockwise I decided, and since the flower racemes were about 20-25cm in length, these were Chinese wisteria. The Japanese wisteria has very long racemes. 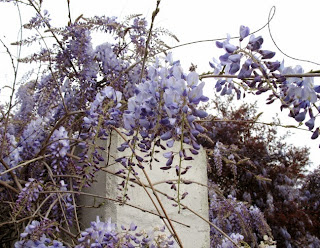 Wisteria is a genus of flowering plants in the pea family Fabaceae. The botanist Thomas Nuttall named the plant in memory of either a Dr. C. Wistar or his friend C. J. Wister, Sr. as his biographer notes. Sinensis indicates the Chinese origin of the plant.

Wisteria sinensis is a deciduous, perennial climbing vine. Flowering is in the spring just before the leaves open. The flowers are very fragrant. The vine is very hardy and fast-growing. It can grow in fairly poor-quality soils, but prefers a fertile, moist, well-drained soil and thrives in full sun. W. sinensis has a higher quantity of racemes than other wisteria. 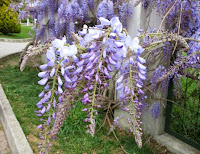 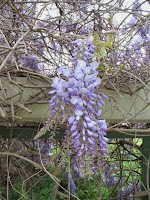 The leaves are alternate, 15 to 35 cm long, pinnate with 9 to 19 leaflets. Pinnation is the feather-like arrangement of the leaflets arising from both sides of a common axis. 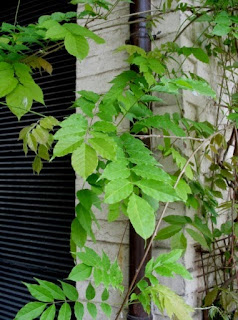 Wisteria can grow into a mound when unsupported. They do better when they can climb up a pergola or a wall. The supporting structure needs to be very sturdy, because mature Wisteria can become immensely strong with heavy and thick trunks and stems. 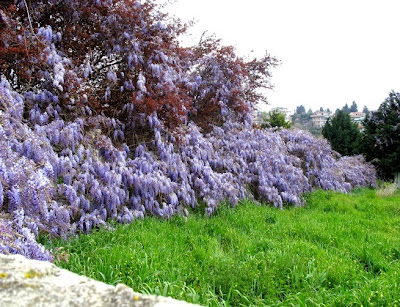 “The fruit is a flattened, brown, velvety, bean-like pod 5–10 cm long with thick disk-like seeds around 1 cm in diameter spaced evenly inside; they mature in summer and crack and twist open to release the seeds; the empty pods often persist until winter.

It was introduced from China to Europe and North America in 1816 and has secured a place as one of the most popular flowering vines for home gardens due to its flowering habit.” (http://en.wikipedia.org/wiki/Wisteria_sinensis)

Wisteria can live for over a hundred years.
Posted by beste barki at 6:15 AM

As children, most of us are drawn to the plants we encounter in our daily lives. Some are in friends and neighbors’ homes and gardens. Others are in the parks or in nature. We form fond memories of appreciating their colors and shapes, seeing them in specific locations and playing with them. These memories stay with us our whole lives.

I am from Turkey originally and I live in Montreal. I would like to think about my memorable plants and let them take me places.